MSNBC's Countdown - For Free on iTunes 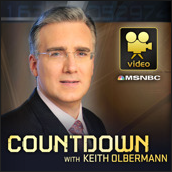 These days, I get most of my actual news from the front page of NYTimes.com, or sometimes Reuters (mostly for Oddly Enough).  For television news and political commentary, I generally fall to the Stewart-Colbert dream team, or Countdown, Keith Olbermann's show on MSNBC.  (Hey, if republicans can sit while their eyes glaze over from Fox News, I think I'm entitled to a little of my own preaching-to-the-choir punditry!  Besides... Keith's wittier than Bill O'Reilly.)
Of course, I don't exactly mark my calendar to make sure I catch Countdown on TV.  To be honest, I don't even know its timeslot off the top of my head.  Which I was pleasantly astonished to find it in the podcast section of the iTunes Store.
Not just clips, or sound bites.  Video.  Of the whole show.
It's not perfect of course.  Mainly because each episode eats up about 220 meg on my hard drive.  My laptop hard drive with 20 gig free.  So, uh... don't think I'll exactly be archiving these things.  But it is impressive that they did this, if not entirely surprising.  Olbermann has long tried to stay on top of the "internets."
Of course, as always with these things, while I'm impressed and grateful to get this so conveniently (and so free!) I'm still a little confused as to the long-term business model of giving non-ad-laden stuff away on the internet for free.  Nice publicity stunt, but how far can you go with it?  Hmm.
As a side note:  MSNBC didn't exactly pick the most flattering picture of Keith there, did they?
Posted by Mike Hanley at 3:15 AM

8pm ET -- repeated at 10pm, since too many of us watch the Daily Show/Colbert repeat at 8 (MSNBC finally figured this out -- they used to repeat Olberman at 11!)

Thanks for the hint - glad my ipod has lots of space!