I'll be honest, I've never really followed hockey.  But even I was drawn to the drama of this showdown between the U.S.A. and our "neighbors to the north."  This wasn't just about a game, or a medal.  This was flat out national pride on the line!

However, I found the fallout in my digital circle of friends rather amusing.  I live in Pittsburgh, and while Americans are mighty proud... Sidney Crosby is a Penguin.  In a town famous (infamous?) for fanatical devotion to its sports teams, this made for some interesting facebook-reading post-game:


(click the image to view large enough to actually read!) 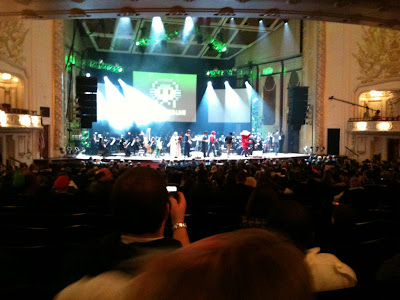 As part of the celebrations, my brother (with some help from my girlfriend) brought me to Video Games Live:  Bonus Round, here in Pittsburgh. This is their second show here with the Pittsburgh Symphony Orchestra.

This show has been touring since 2005, and plenty has already been said about it. Suffice to say: it's a really fun evening, and I'm really happy to see video game music, and game music composers, getting this kind of wider recognition. I wasn't able to make it the first time they had a show here, so I can only comment on this performance. A few highlights...


All in all, it was definitely a great experience, and I hope to go again!
Posted by Mike Hanley at 3:16 AM 3 comments:

Some of the information here is just crazy.  I mean, yes, clearly the machine needs to store cached digital versions of documents in order to fax them, email them, or even just offer a "print 20 more of that last thing I did" button.  But why in the world would the copier ever need to store 25,000 cached documents???
Easy fix?  The drives should be wiped before the machine is resold or returned.  (and if there isn't already a way to do that from the menus, there should be.)  That's the same standard operating procedure a company should be using for computers.  And let's face it, everything is a computer these days.
Posted by Mike Hanley at 8:25 PM No comments:

I actually spotted a Flash ad for this video on my webcomic several days ago, and word is that Google is going to be playing it during the Superbowl.

Simple, honest, emotional...  now that is how you do advertising.
Posted by Mike Hanley at 2:18 AM No comments: