This post will probably get pushed down by newer, more up-to-date stuff in the near future, but since it's over half a month overdue, I wanted to get it up.

Halloween this year was pretty fun. I actually knew what my costume was going to be way ahead of time this year, as opposed to my usual habit of having to come up with something days (or hours...) beforehand. And honestly, it's been pretty much inevitable since high school that I'd eventually do this one. 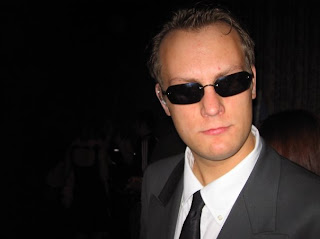 Yup. I finally did Smith.

In addition to being the one night in the year when my hairline was actually an asset, my costume also went together very nicely with Christine's: 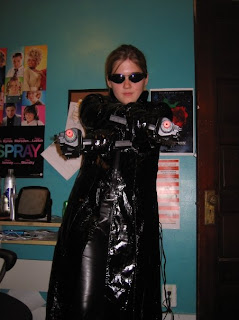 And apparently, we weren't the only ones in a Matrix-y mood that night. On our way down the massive Clarendon hill to get to our intended party, we got a number of hoots and hollers of approval, until we saw one of the Twins in a very convincing costume. (Sadly, there was only one. Even sadder - I didn't think at the time to yell for him to stop and pose for a picture!) Once at the party, we also ran into a Neo upstairs. Surprisingly, there seemed to be very few Jokers and Sarah Palins out that night. 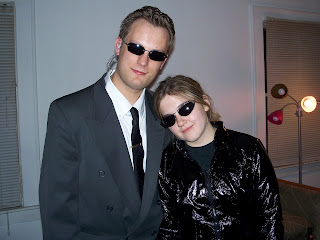 Overall it was a really fun night!
Posted by Mike Hanley at 2:16 AM No comments: