If you haven't already, scroll down and read the first part of this lengthy catch-up. This entry will just tie up the loose ends of what's left over from that one.

Thank You For Smoking -- Funny. A very enjoyable movie, but if I hadn't been using a free ticket pass that I had to use up at the theater in Syracuse before it expired this summer, I would probably have regretted seeing it in theaters. It's not that funny. Save the $8-$10 and see it on DVD.

Mission: Impossible III -- Aside from being the most overzealous use of Steadicam this year, I was pleasantly surprised with this one. The plot is deeper and more "important" than previous installments, and J.J. Abrams did a fine job telling the story. If you can ignore memories of couch-hopping and Scientology, this is a pretty good movie, and a good opener for the string of "blockbuster" summer movies we have coming up this year.

Da Vinci Code -- As expected, the book was better. But this is still an engaging movie, and Ian McKellan, as always, steals the show. Probably worth seeing, especially if you put stock in numbers. The second-biggest global opening behind Episode III is pretty impressive. Most of all, don't listen to the protesters. A movie can't tell an intelligent person how to think, and you shouldn't let them try either.

Yeeeeeah... As mentioned in my last post, film and developing for next year is going to run along the lines of a couple thousand dollars. Ouch. More than ever, I require summer employment! Unfortunately, I still have yet to have a "real," over-the-table job, what with the W-2's and the taxes and whatnot. Sure, I mowed a few lawns, I've done computer help for the neighbors, and I've helped my dad with some major renovations (cough-roofing-cough) that he was more than happy to give me some decent cash for, as contractors would ask about 10x as much, but I still haven't been "officially" employed, so that pretty much rules out places that require prior experience.

So far I'm filling out applications for places like Arby's, Boston Market and the like. (I will work pretty much anywhere but McDonald's. I don't care how "not bad" Andy says it is...) Haley mentioned a couple other places he's applying last night that I may try as well. I'd like a well-paying, tech-y job like Will and Andy landed, but that's borderline impossible considering my (lack of) employment history. In any case, I need to re-email all the references I used last year so they won't be surprised if their phone rings. (I really did apply at a few places last year, but Blockbuster screwed me over. Long story, for another time...)

Email ThisBlogThis!Share to TwitterShare to FacebookShare to Pinterest
Labels: movies

For no apparent reason, most of my friends (save one) have gotten back into updating their blogs with surprising regularity since summer started, leaving me in the dust a bit, as I kinda dropped off the online planet for the last couple weeks. Time to play catch-up. This one will be long, so I'll break it into sections.

Where The Hell I Was the Last 2 Weeks

Nowhere really. I just kinda did nothing for most of it. There were a couple points of interest though. Last weekend I tagged along with my old Scout Troop to visit the Beaver Valley Nuclear Power Station. Obviously, we couldn't tour the plant itself, but we did get to watch a presentation on how it works that was simultaneously dumbed-down, yet still over the head of anyone who hadn't taken AP Physics. We also got to see the "simulator" rooms where they train people to operate the plant. It was all very interesting.

I also seem to have inexplicably gotten back into the PS2 my brother and I share. While getting him something for his birthday at EB, I spotted a used copy of the PS2 port of Splinter Cell for $3.99, which I immediately snagged for myself. Pretty fun game, even if the parking garage level is driving me nuts. (the lightning gets rid of my wonderful shadows! Nowhere to hiiiiiide!) I also have a strange desire to finally play Final Fantasy VII, but used copies seem to have become collector's items lately (at least on eBay). Plus I need to find my PS1 memory card. I also would like to try out God of War (which I saw at college, and it looked great), Ico (which gets so many "unknown masterpiece" reviews it's silly), and possibly Kingdom Hearts (I just need to know why my future roommate was sooooo obsessed with the sequel). Why the sudden console interest? No idea.

I came home on the 6th, but the last project for my 3D class wasn't technically due until Thursday the next week, via e-mail. The assignment was to make 3 images that "show the passage of time." My plan for that project was to do a "Star Wars"-ish scene, as sort of a proof-of-concept for my upcoming fan film (more on that in a future post). The 3 images would be like storyboard frames (or, optimistically, DVD frame-captures) of a sequence where a ship lands. When I left SU, things were looking good, as the ship itself was pretty much modeled (though not textured). 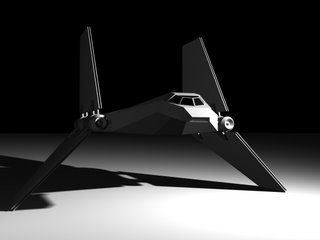 However, once home, procrastination reared its ugly head. Due to multiple entirely-avoidable distractions, I ended up doing the rest of my work on the project the day it was due (at 6pm). For this reason I am, shall we say, less than happy with the final results. The ship still isn't textured, and the surrounding world was made in a few hours. The lighting sucks, and the torrential rainstorm (which would have obscured some other flaws) was abandoned when I couldn't get rain to not look terrible in the time I had.

Meh, here's the results anyway. My brother thinks the first shot looks like a cutscene from Jedi Knight. 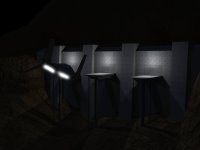 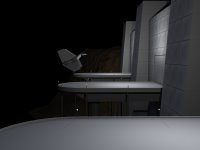 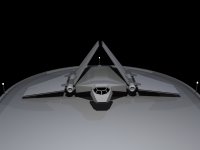 Yeah... overly dark, simple, bleh. I didn't even have time to use a good quality level of anti-aliasing like I did on the test render. Maybe someday I'll revisit these, but they were apparently good enough for the class, as seen in the next section...

Everyone else is posting them, so here we go...

Filmmaking: Cinematic Modes -- A
Introduction to 3D -- A
Intro to the Theatre -- A
Adv Acting (Drama Minors) -- A
Writing Studio 2: Critical Research -- A

So yeah. There you have it.

SU doesn't have a nifty calendar view like some of you (at least, not a publicly-viewable one), but here are my classes for Fall 2006, with the obligatory commentary:

Acting For Directing, T/Th 3:30-5:20 pm
We basically get credit for being the actors in the same directing class that we will be taking a semester or two down the road. Word on the street is that this helps with building a good rapport with the professor. Whatever.

Survey of Theatre History, Mon 6:30-8:40 pm
Another required drama course. At least this one has the same cool teacher we had for our last 2 theater classes.

Basic Social Ballroom Dance, Wed 7:15-8;45 pm (1 credit)
Hey, it's different! Funny story - some guys thought this is a good way to "meet girls". However, it looks increasingly like I already know like 50-75% of the girls in this class. Not that that's a bad thing.

Cinematic Modes of Production, T/Th 6-8 pm
I finally get a production class!!! Yes, the film majors finally get to make movies. Only bad news - although working with actually film is a very good thing to learn, it's expensive as hell. I mean, they charge by the foot for this stuff. Some sophomores I talked to quoted a couple grand for film/developing. Not friendly. I really need a job.

Film Scriptwriting, Wed 2:15-5:05 pm
Again, hooray for more hands-on classes related to my major. And this one isn't even expensive!

Piano/Non Music Majors, T/Th 11:55-12:50 pm (2 credits)
I've always wanted to try this. Thanks to some clever talking by a friend of mine, we get to combine these 2 credits with the 1 credit from Ballroom to count as a normal 3-credit elective.

It's currently time for dinner, so I'll finish this post later tonight. Finishing this was interrupted by a last-minute-ish Firefly/Serenity marathon at a friend's house. I'll cover what's left over in another post.
Posted by Mike Hanley at 6:32 PM No comments:

First person to name that movie quote gets... well, nothing actually.

About this time last night I rolled, semi-conscious, into Pittsburgh. I finally got my computer hooked up again tonight, and am already feeling the speed hit of moving from the Internet2-enabled connection of a major university back to plain old Comcast cable internet.

So, my freshman year of college is now "over." (Well, not totally. My last 3D project is due by 6 pm Thursday via e-mail, but whatever.) Now my priorities are to get a job, and move back into my own house (which feels somewhat strange...) But first, I must sleep. It's past 2, and I should work on getting back from a "college"/"quasi-nocturnal" sleep cycle, and into something more "normal" (ha!).
Posted by Mike Hanley at 1:30 AM 7 comments:

'Tis a good day for Star Wars fans, and really, all film geeks. Heck, all geeks period. Scratch that: good day for everyone!


On a totally unrelated note, I have a sinking fear I may not be sleeping tonight, as I'm going home tomorrow, and the majority of my packing is still to be done. Crap.

Email ThisBlogThis!Share to TwitterShare to FacebookShare to Pinterest
Labels: movies

Title pretty much sums it up. Test was on just about the opposite of what he said we should study.