I catch a cab at 8:45 AM, wade through Thanksgiving lines at the airport, catch my 11:15 flight out and I'll be in Pittsburgh by 1:00. My roommate left yesterday, and most everyone else on my floor left today so it's pretty barren tonight. This was the dining hall at 6:30 PM... 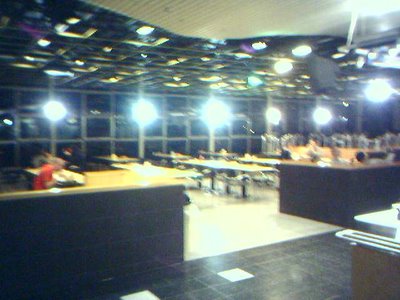 There wasn't much food, either. Just hot dogs, hamburgers, some crappy pasta, and salad. I pity the poor fools who aren't going home over the break. The one upshot of there being not many people here is pretty much all the crazy kids went home already, so the people left behind are pretty cool. I got to introduce the joy that is "Rejected" to a couple more people. Muahahaha!


Recapping the time since my last post - well, I got a "new" Canon Optura 30 video camera off ebay. $310 for a camera that was $899 a year and a half ago is not bad, if you ask me. Throw in a case and extra battery and you have one happy film student!

What else happened? Oh yeah, we finally had snow on Friday! Come on, this is Syracuse for crying out loud, we should have had snow before Halloween! Pittsburgh got snow before us! 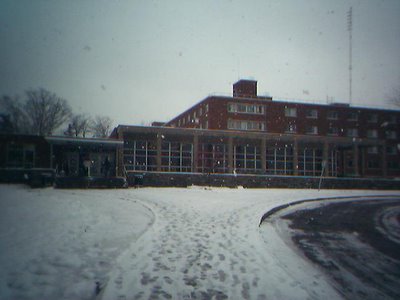 I've also been dealing with scheduling, which is turing into a real pain. Oh, I got my required courses in all right, although the only schedule that fits requires me to make the 20-minute walk from Syracuse Stage to Main Campus in less than 10 to get to my next class... but we told the professor about that so he's just going to try to shift the second class 10 minutes later. But that isn't the real problem - the real problem is my electives. I took so many AP's in high school that I can get out of all but 3 of my "academic elective" (read: arts & sciences) classes, one of which I took this semester. Instead, I can skip electives altogether some semesters (which I will take advantage of Junior and Senior year since I'll be spending so much time making longer films) or take studio electives (art stuff) instead. A studio elective sounded good for spring, so I signed up for "Introduction to 3D," where you get to learn Lightwave. Sounds like a really fun class. The problem is, it's normally reserved for Computer Arts majors (what happened to the ease of exploring different interests within the Transmedia department?) so I have to get a slip signed by the professor to let me take it.

Ok, but there's one problem with that - I can't track him down! his office hours are listed as only 12pm-1pm Thursdays, but when I went last week the door was shut and locked! I sent an e-mail, but I haven't heard a response yet. The head of my department said I was doing what I should, and that if I don't get a response in another week, I should send a follow-up e-mail. But by then the course may be full! Sigh... college. There is some good news about my schedule, though; As it's shaping up now, I won't have any classes on friday. Granted, I'll have an 8:30 am class on Monday, but whatever.

Wow, that turned into a rather long rant. I guess then I shouldn't go on too much about my stupid last paper for Writing 105, or my even more stupid Final essay for Art Media... yeah.

I know I've been neglecting the comic for... like... a month. I'll see if I can do something about that over break. Heck, maybe tonight, I'm not really doing anything else. We'll see.

To my friends: I'll see you guys back in the 'Burgh! We seriously need to have a LAN party, or Risk, or D&D. Something!
Posted by Mike Hanley at 6:51 PM No comments:

As Mike pointed out, he and Will had some fun with me last night. As requested, I'm posting the exceedingly humorous logs from the AIM sessions I had with the two. Be warned - they're long! I couldn't summarize what happened if I tried, so you'll just have to figure out what's going on for yourself! Rest assured, this will make it into the comic in some form. It's just too good to pass up.

We'll start with my chat with Will. I signed on to AIM last night, and was greeted with this:

Heh, yeah. Around here is where Will called to tell me it was a joke, and make sure I hadn't called his parents or anything. :) And then my chat with Mike. Keep in mind these are going on around the same time:

Haley has a blog!

Attention! - After a long history of reading and occasionally commenting on others, perfoming the blogging equivalent of lurking, Haley has finally been successfully talked into starting his own blog. This battle has been won, but the war isn't over! The villian is now threatening to not update again under some pretense of having a "boring life." Our efforts must not fail! We must spam him with comments to force him into updating!

Ahem. Yeah, so the only serious news in this post is that Haley has a blog now.
Posted by Mike Hanley at 1:09 PM 1 comment: