Seeing as both our schools are on Internet2, Will and I decided to play around with that a little bit. Will had already seen AIM file transfers work over Internet2, but we wondered how well HTTP would work. I fired up the webserver (Apache) on my PowerBook G4, and put up a simple page offering up one of the > 1 gig DV Quicktime masters for my movies. 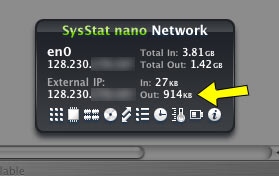 Wheeeee! Nice and fast. Almost 1 megabit a second, across state lines! (Don't worry, the movie only consists of footage shot by me, and music by Edgen, so it's all legit.)

In related news, the University of Pittsburgh is mean and firewalls thier students so Will can't do this. And they have the same "one computer per residental connection - no switches or routers!" rule that SU has. Pity, since a dedicated server running 24/7 out of my dorm room would totally solve my movie-hosting issues.
Posted by Mike Hanley at 1:15 AM No comments:

I decided to finally get around to seeing what Syracuse is giving me in terms or webspace, of for nothing else than to finally host my movies in a stable place. So, I started looking around the Computing and Media Services site.

Andy is probably the only one who will appreciate this, but I was delighted to find that students set up their webspace through a normal, old-fashioned UNIX shell account! And on a Sun server, no less? Geek heaven!

But here's the fun part: some of thier instructions are flat-out wrong! In particular, once you've logged in, made a public_html folder if it wasn't already there, and created index.html with pico, (Yay pico! More geekery!) you are told to set permissions. I though this seemed like a lot of work for non-UNIX geeks, but at least they spelled out exactly what to type, right?

Well, explicit instructions don't help much if they are incorrect. Check this passage:

Nice and simple, right? Problem is, those aren't the permissions you want for public HTML files. "chmod 644" gives everyone read access to the files, but a webserver needs execute privileges to show the page. So if you followed the instructions, then tried visiting your site, all you would see is a nice "Error 403: Forbidden". So I just went ahead and fixed it with "chmod 755 index.html", and now my test page is up for all to see. But someone who isn't a total nerd can't be expected to know that.

I guess I'll have to call/e-mail them tomorrow. Calling might be more fun - how knowlegable of a person do you think they put in charge of the phone? >:)
Posted by Mike Hanley at 1:39 AM 1 comment:

In my last post I hinted at my initial playing around with Q - an x86 (and other) emulator for OS X. Well, I got "somewhere" with it, and here's the results.

Warning: the following images depict the results of me being bored, frequently late at night. Emulation of a foriegn processor architectures redefines the very word "slow." We're talking 10x decrease in performance over native speed, easily. On a 1.67 GHz laptop. The tasks depicted cannot concievably serve any useful purpose whatsoever, and were done purely "for the hell of it."

Ahem. Anyway, after several hours, (during which I went to class and did some homework) the WinXP install finished, and I tried to boot it, only to be met by this confusing error during login:

A problem is preventing Windows from accurately checking the license for this computer.
Error Code: 0x800703e6.

Whoops. At this point I figured XP wasn't going to work (though I didn't know why) but I didn't really care since something with lower requirements like 98 would be much more suited for this anyway. With XP giving me problems, I tried to fool around with my Knoppix LiveCD, creating a new virtual machine with no hard drive, set to boot from CD. 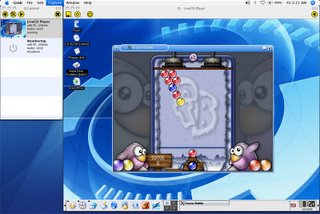 Obviously, this worked, but it wasn't pleasant. Those of you who have used it know that Knoppix is pretty sluggish to begin with. Put it on a virtual CPU that would be lucky to get up to 100 MHz-equivalent speed, with only 256 meg of RAM allocated to it, and the experience becomes downright painful. Frozen Bubble wasn't even playable at lowest graphics settings. (Granted, no one uses a PC emulator for gaming, but it's Frozen Bubble!)

After that entertaining but useless experiment, I returned to the Windows issue. Looling through various online forums, I found that the error could be avoided by installing Service Pack 1.

Problem: I have a SP1 CD, so I don't need the internet, but how does one install SP1 if you can't even log-in?
Solution: Everyone's favorite last-resort, Safe Mode! 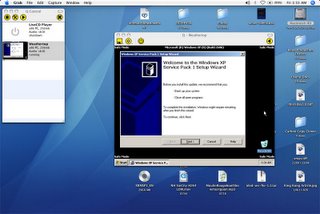 This did the trick, but do I even need to mention how god-awefully slow it was? Eventually, however, the "machine" rebooted... 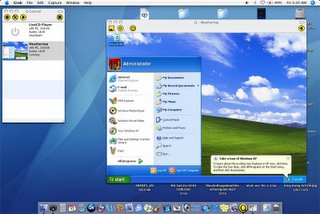 Success! The system was beyond sluggish, but it worked, and as far as Windows was concerned, nothing outside of the "computer" it was running on even existed. I was even able to use what is arguably the most frequently-run and well known pieces of Win32 software on the planet: 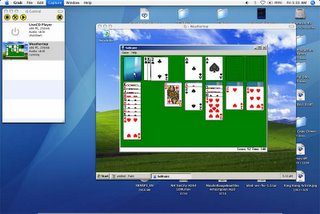 Although it would be difficult to do much on a slow, emulated system like this, I was suprised to find that, once they were launched, basic GUI applications like Solitaire or MSPaint were actually quite useable. (Here I mean "useable" in the same sense that Doom 3 on a GeForce 4 MX is "playable") Networking even worked, although with no anti-virus, and the fact that Windows update would take too long to be feasable, I wasn't to eager to go online with this. While I obvously couldn't do any gaming on a setup like this (my main reasone for having both a Mac and a PC) I could easily see this sort of solution working for someone who just has one little program that they can't leave behind.

Granted, this is really nothing new. VirtualPC has been around for years, and Microsoft's tweaking of it allows Windows to be run faster on it then on this solution. The main draw to Q is that it's open source, and consequently free, whereas VPC costs $250.

Q is an interesting curiosity on my G4, but on the new Intel-based Macs, it has a chance to really shine. A preliminary Unversal Binary has been released, and users are already reporting that it is quite fast, with the virtual CPU benchmarking as high as 600 MHz on the Intel iMac. If the QEMU Accelerator is ported to OS X/x86, things could really get interesting.
Posted by Mike Hanley at 9:00 PM 1 comment:

Email ThisBlogThis!Share to TwitterShare to FacebookShare to Pinterest
Labels: geekery

I'm Such a Geek

Just a little teaser of what I'm playing with right now... 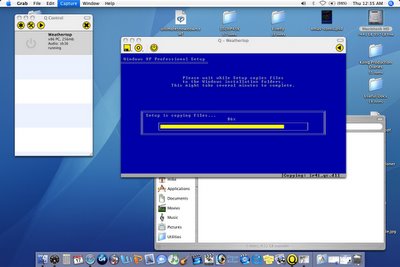 I'll post more on this when I get somewhere with it. For the curious: Q Emulator homepage.

Instead of merely echoing most of my friends' sentiments, I'm going to do it Film Student style with a movie quote:

"Random Thoughts, for Valentines day, 2004. The day's a holiday invented by greeting card companies, to make people feel like crap."

- Joel Barish, as played by Jim Carrey in Eternal Sunshine of the Spotless Mind

The year's off a bit, but it still applies.
Posted by Mike Hanley at 4:35 PM 1 comment:

It's Not My Birthday!

Past midnight - looks like it's technically no longer my birthday.

Woo-hoo, 19. I can officially do... nothing I couldn't last year. Except maybe buy beer in Canada. So if I go to Canada in the next year, I'm all set.

Thanks to eveyone who wished me a Happy Birthday in person, on AIM, on Facebook or on the phone. Even if most of you will never read this!
Posted by Mike Hanley at 12:30 AM 4 comments: 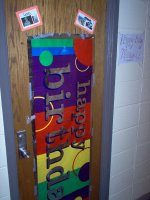 Past midnight - looks like it's technically my birthday now.

I've seen lots of weird research ideas into "alternative" interfaces for computers, but this one seems really, really interesting. It's a touch-panel interface that can recognize multiple contact points at once, and do things based on the movement of both points. For example: if you touch opposite corners of an image and then pull your fingers apart, the image will scale up. If you rotate. Or, (depending on how the software is set up) you could zoom in.

This NYU page has a quicktime video showing some great proof-of-concept programs in action. The "Google Earth"-ish one looks especially fun. I want one!
Posted by Mike Hanley at 5:50 PM No comments:

Ok, it's been awhile since I updated this (although I think I'm still ahead of my friends with that...) but I wanted to put up some of what I've been working on in my 3D Computer Art class. Lightwave is a much less intuitive 3D program than I'm used to, but it's also a lot more powerful, and I'm liking the control that I have over what I'm modeling.

The first thing we modeled was a mug. Simple enough, but it taught us about lathes, the bend tool, sub-patching, and a slew of other features of the Lightwave interface. 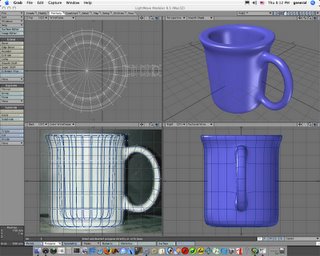 Our next few models were a little more free-form, as we had to make three things from a really crappy poem we had to write. I made a pencil, a pad of paper, and a hand. 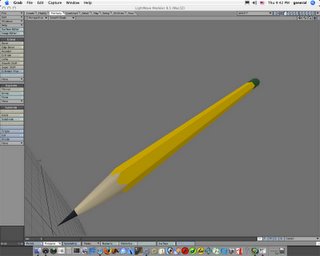 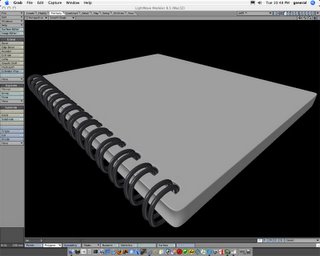 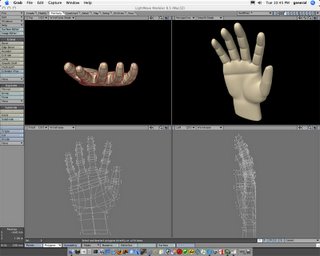 Really, I think the hand says it all. I thought I was ok at modeling, (even did some nice low-poly characters for Andy's and my senior project) and I could probably have made something resembling a hand in TrueSpace, but not like this. Well, maybe with a lot of practice, but not in the hour-and-a-half that it took me to do this. I like Lightwave.

On another topic, I've finished watching all the existing episodes of Firefly. Shiny! Very, very good series - Fox executives were fools to cancel it. Of course, this seems to be a theme with them (vis-a-vis: Family Guy). Haley, thank you for having this at the LAN party! Now all I need to do is see Serenity.


Extra fun bit of trivia: This post does not randomly jump from one topic to another...

The visual effects for both Firefly and Serenity were primarily done in Lightwave. :)
Posted by Mike Hanley at 3:03 AM No comments: