I seem to have inadvertently deleted the customized theme information for this blog...  Have picked one of the stock themes for now.  I think I have a backup... If not, I may be redesigning my blog sooner than anticipated!
Posted by Mike Hanley at 2:53 AM No comments:

Home for the Holidays

I got home late wednesday night.  Well technically thursday morning.  In any case, the lights were still on when I got home, which is more than Christine can say.  After the big storm that blew through New England on Thursday, there's still several thousand homes in upstate(ish) New York without electricity.  Four days later.  Kind of outdoes the should-be-more-of-a-surprise Comcast outage that greeted me when I got home.
She'll be coming to visit for New Year's, but since we're at our respective homes for Christmas, we exchanged gifts before we left.  I think she liked the necklace I got her: 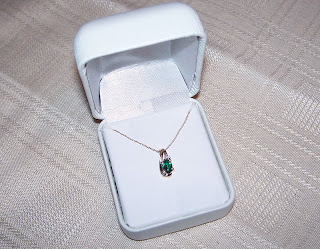 Emerald, because it's her birthstone, and because it goes well with her eyes.  I suppose jewelry is kind of a typical boyfriend-present, but I think she liked it.  :-)
And I know I liked my present! 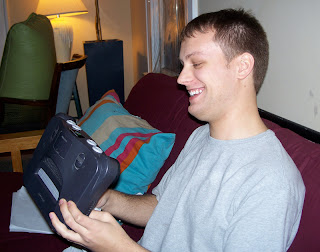 Yup - a legit Nintendo 64!  Just like the one on which I wasted so many hours playing Mario Kart 64 with Tony, Eddie and Kevin sophomore year!  My girlfriend is awesome.  Speaking of which, Christine also got me Star Fox,  a rumble pack, and... Mario Kart 64.  Goodbye, productivity!
And yes... I've already unlocked the "Extra" reversed versions of all the tracks in Mario Kart, and beaten Star Fox once.  Crazy freaking floating monkey head...  (Yes, I got the lame noob-Andross because I suck.  Don't judge me!!)
Now that I'm home, I've got lots of time to play video games and the like (already ordered Ocarina of Time on eBay...).  Although there are of course plenty of other things I should do.  Things like updating my resume, putting together a legit demo reel or two, and trying to do at least some networking before college cuts me loose in May...  (Aaaaaaaaaaah!!!!!!)  I also think I'm going to revamp HanleyFilms.com yet again.  Present glitchy navigation aside, its hard to keep it really up to date when it's all hand-edited HTML, and Directionless has really shown me how much easier it is to maintain a site built on some sort of Content Management System.  Since I'm already helping transition DUQ FM's website over to a new, Joomla-backed design, now might be a good time to use Joomla to build a new  professional website for myself as well.  If I'm trying to make contacts in the Film/TV/Media/Computer/Gaming/etc market in Pittsburgh, having a well-polished web presence would kind of seem important.
Oh, and speaking of Directionless.  Damn.  I really need to get on that...
Posted by Mike Hanley at 11:24 PM No comments:

Thanksgiving coming so late this year has created a rather weird schedule for those of us going to college (relatively) far from home. I just got back to Syracuse last night, and I'm leaving for Christmas Totally-Not-Organized-Around-One-Religion's-Holiday Break next week on Wednesday or Thursday. In between, I have to do one final exam, two 2-page "memos," one 8-page creative history writing assignment, a presentation on the play "Art," and a 10-second-long 3D animation in Blender. And a few late-night shifts at the Newhouse edit suites. Fun!

Over thanksgiving, in addition to eating a large amount of turkey and stuffing, I also participated in the Black Friday shopping "experience." Didn't actually get going until "late" - after 6am. The parking lots were pretty crazy though. At the mall one guy almost backed right into us at a fairly decent clip, while we were distracted by the children trying to get run over on the other side. Needless to say the stores were swamped, though oddly Best Buy still had some 2 gig SD cards for $7 apiece left. So now I can take over a thousand pictures on my digital camera at a time. Or an hour of MPEG4 video. Wow.

I did get some of my Christmas shopping done, with presents for my dad and brother, as well as something special for someone special... :-)

But now I am back to school, and back to work. Boo.
Posted by Mike Hanley at 1:31 PM No comments: