Earlier this afternoon I decided to pre-order some pizza for the Superbowl later (Go Steelers!).  I wanted to make sure my order was in early so I'd get my pizza despite the inevitable madness that will ensue around 5-7ish tonight.
I placed my order through the Dominos web site, and after it was submitted, I saw this: 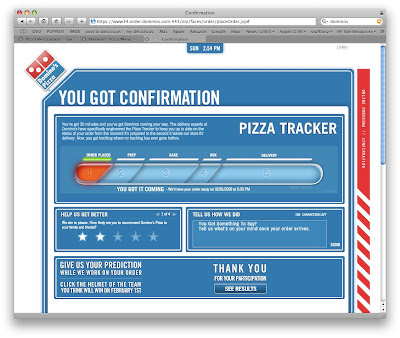 Wha-  I can even get tracking info on my pizza now?  I did some Googling, and it seems like most of the reporting on this new feature is relatively negative.  The verdict in a nutshell:  Their pizza sucks anyway, and the only people who will use this are antisocial web-addicts with no life and nothing better to do for 30 minutes.
Obviously, I can't speak to the taste issue - to each their own.  But to throw my two cents in, I'd say this is a nice reassuring feature to have in a case like mine, where you place your order several hours before you want to see your food.
Posted by Mike Hanley at 2:56 PM 1 comment: