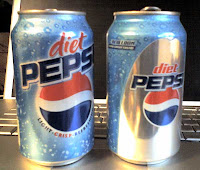 Is it me, or do the people at PepsiCo enjoy introducing new can designs on, oh, a bi-annual basis or something? (Yes, I'm aware how mind-bogglingly not important this is, but I've been trying to describe it to people, and couldn't quickly find examples with Google.) I bought more of my only habitual drug today, and noticed they did it again. Old on the left, new on the right.

If you ask me, the new one looks like a prop from the set of Back to the Future II.
Posted by Mike Hanley at 7:16 PM No comments:

We don't need tighter gun control laws. We just need to ENFORCE the ones we have...

I've seen talk around the 'net saying the Viginia Tech shootings clearly demonstrate the need for tighter gun control laws in this country, since Cho was able to walk into a store and purchase the gun he used to kill 32 people. Now, I am by no means an NRA "More guns = less crime because we can shoot the bastards!" sort of guy, but I've never been for banning the ownership of firearms by private citizens either.

I found this article in the NY Times: U.S. Rules Made Killer Ineligible to Purchase Gun

Yeah, he bought the gun. But that shouldn't have happened. If the proper checks were made at the federal level, that purchase would have been denied. Sure, he could try to get one on the black market, but that's possible even if a ban is put in place. (Banning guns will get them off the streets? Sure! It's worked so well for drugs, underage alcohol, not-yet-released Hollywood films...)

We don't need tighter gun control laws. We just need to properly enforce the ones we have!
Posted by Mike Hanley at 12:24 AM No comments:

The really funny part? I first saw this on Al Jazeera... Yes Timmy, they have "viral video of the week" in Qatar too.

Wait- I'm up at this ungodly hour watching the (horrible quality) online stream of Al Jazeera English, and laughing at satire about how the leaders of the U.S. and U.K. are attached at the hip? Yeah... must be nearing the due date for my Communications & Society paper on global coverage of the "British sailors held in Iran" incident!
Posted by Mike Hanley at 3:08 AM No comments:

100th Post. Nothing Special, but My iPod is Filling Up

I seem to have lapsed in my blogging for awhile (not that anyone cares). I hate big catch-up posts explaining every little thing that happened while I was "gone," so I'm just going to post something trivial and pointless, as if something ever happened. What else is a blog for? (All hail New Media!)

My iPod is almost full. When I got my Nano about a year and a half ago, I figured 4 Gig would be plenty for my meager library. Well, owning an iPod tends to make one listen to music a bit more, and I've been steadily expanding since then, so that I'm now 90% full (Tha't's after I set all the Christmas songs and Monty Python sketches to not sync over...)

While noticing this, I took the time to notice a couple statistics in my iTunes Library, just to add some fuel (and hard numbers) to the RIAA vs. the World fight. 5% of my music was purchased through the iTunes Store. (The rest being primarily MP3's of... varying origin.) However, purchased tracks make up 40% of my Top 25 Most Played songs. The number 1 spot is an MP3, though. I'm sure that says something about the iTunes business model, DRM, etc., but damned if I know what...
Posted by Mike Hanley at 1:29 AM No comments: