I'm not even entirely sure why I felt a need to update this blog now, since most of my friends have abandoned theirs, and I'm fairly certain no one reads it anymore. Not to mention that my experience with webcomics has taught me that a multi-month lapse is a very good way to kill off whatever readers one may have had left.

Whatever. Someday, when I've gotten famous, had my run, and fallen out of fame again, maybe I can just turn this into a book. ;)

In any case, it's been incredibly busy since I got back to SU. Most of this is owing to two things: First, the Crime in U.S. Society class I took because it looked interesting turned out to be a huge pain in the neck... and second, we've started production classes!

I won't deny the coolness of finally being able to say "I've shot film!" Even though it's only 16 mm... and I've only shot about 2.5 minutes of it personally... and most of it was half a stop underexposed... and I left the shutter closed for the entirety of one cool shot... and the movie wasn't that great anyway... it's still cool!

But it's also very time consuming, and the lack of immediate feedback is quite annoying. So far I've made one straight, in-camera, black&white, silent dream project (where have I done that before...), and I'm going into production soon on my final project for this semester. It's a bit of a doozy - my teacher still doesn't understand exactly what I'm talking about when I pitch it. I may have bitten off more than I can chew with this one. But that's fun, too, right? Right?

As previously stated, things are a wee bit hectic right now, so I'm going to have to cut this haphazard post short here for the time being. I leave you with a horribly transferred frame of the coolest shot in my dream project: 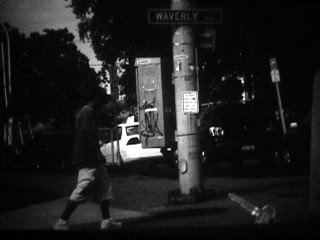 And I'm afraid that's all you're going to see until I get a proper video transfer done (probably in November/December). This shot was captured by pointing my video camera at the screen of a Moviola, then tweaking the resultant image in Photoshop. A lot.
Posted by Mike Hanley at 5:12 PM 1 comment: