A little bit ago.  And now, from a friend of mine from Syracuse... 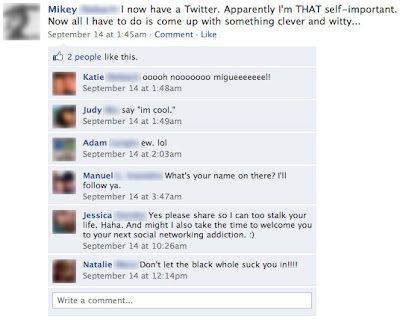 Responses that are sarcastic or dismissive about Twitter itself:  4.

And one of the people who wants to follow him is slightly snarky about it as well.
Posted by Mike Hanley at 11:31 AM No comments:

Along with some modestly (though interestingly) updated iPods, on wednesday Apple introduced a new version of iTunes. They've done a pretty good job of hyping the headline new features of this release - iTunes LP, Home Sharing, a redesigned iTunes Store, and so on. However, there seems to be one new small feature I haven't seen mentioned anywhere else:  video tutorials! 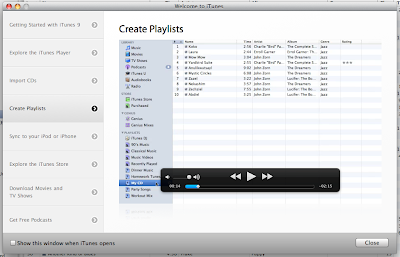 This new window pops up the first time you launch the program after upgrading, but can also be called upon any time by choosing Help -> Welcome to iTunes from the menu bar.

This is genius, especially for people like my mother, who haven't been using the program since (virtually) the beginning, and can barely put together a playlist without some help. My only question is - why did no one think of this, oh... 8 versions ago?

Another interesting note for other geeks like me:  The video playback controls in this new version seem to bear a strong resemblance to the ones in QuickTime X - even on my poor, not-yet-snowy 10.5 system.  Huh.
Posted by Mike Hanley at 1:40 AM No comments:

Email ThisBlogThis!Share to TwitterShare to FacebookShare to Pinterest
Labels: Apple

My father is the General Manager of WDUQ-FM, the NPR-affiliate public radio station at Duquesne University. Over the last few years, he's been bombarded by people in his business worried about "what's happening" with social media, and where traditional media fits in. A few minutes ago, he e-mailed me a link to this video, noting that he'd "love your reaction to this."

Here's my reaction (posted on my blog, for that extra kick of "meta"-ness!):

Personal computers have been used to improve communication almost from the beginning. Even a lowly, non-networked IBM PC with a word processor and a spreadsheet improves the efficiency of crafting office memos and accounting reports drastically over that of a typewriter and a ledger. Networks made computerized communication faster, and spread it farther. The internet kicked things into high gear.
The biggest mistake people make when talking about digital communications, is in calling things "revolutionary." Technology as a whole is the poster-child for evolutionary thinking. Unfortunately, to the uninitiated, there appears to be more going on than that, because the rate of evolutionary advancements taking place also increases.
Perhaps the biggest advantage held by people my age, who grew up with all of this well into full swing, is our ability to take it in stride. Sure, we use facebook on a many-times-a-day basis, but we don't fawn over it. Already, we usually give it little more thought than previous generations did to how many times a day they used the telephone. (Though, like them, we do still retain the ability to, once and a while, marvel at how ridiculous it is that you can actually do this. Tech is cool.) We don't analyze how each new innovation is going to change the entire world and the nature of humanity - we just use it. If it works for us, we keep using it. If we get bored, or it doesn't seem interesting to begin with, we move on. Are there downsides to this approach? Certainly. But I do think we have a more level-headed appraisal of things. 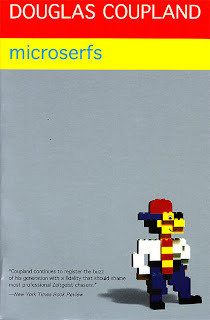 I think growing up in the nineties has tended to create a perspective that is difficult to impress anymore, when it comes to the internet. "Things are suddenly happening twice as fast and in twice as many ways as before? Ok... this is supposed to shock me? It's been that way for most of my life."

The internet, like people of my generation, is a product of the nineties, and in many ways still operates like it. On a recommendation from my girlfriend, I recently read Douglas Coupland's Microserfs. It was lauded as a portrait of a cultural microcosm specific to its time and place, but honestly, I didn't find the world all that different from the one we live in today. "Dot-Com" start-ups have been replaced by "Web 2.0" start-ups, but the tale is largely the same.
One more thing about my generation - having lived through the "Dot-Com Era," we have grown to truly loathe transparent buzzwords. Seriously. "Socialnomics (tm)" actually made me cringe.
I'm not sure where exactly I'm going with this, (commentary on the stream-of-consciousness web I find so little unnerving about?) but I've already ranted for much longer than I intended to, so I'll leave it at that.
Also: I've always liked that Fatboy Slim track. (also a product of the 90's...)
Posted by Mike Hanley at 4:14 PM No comments: