My Room is a Digital Graveyard

It's really pretty sad. The truly depressing part is - this isn't even half the stuff. It's just the junk I'm currently trying desperately to get rid of! 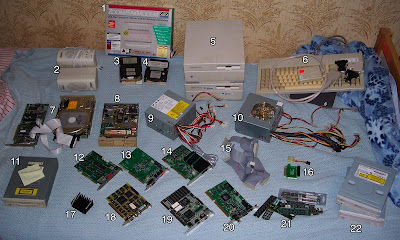 Click the image for a larger view. Any or all of this stuff can be yours if you want it, just make me an offer. ("Free" counts as an offer. Ok, maybe not for the 350W power supply. That's still almost useful.) I'd just throw most of it in the trash, but I've got too much Liberal Guilt for that. (I mean, come on now.)

And like I said, that isn't even close to all of my older computer junk... It's just the really ancient crap I'm trying to get rid of, hopefully without it ending up in a landfill. I still have (including my normal everyday machines) 5 computers that will boot and run, a couple spare AMD motherboards and AGP video cards, 2 Palm PDA's... and a few assorted knick knacks: 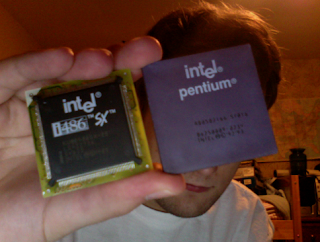 Posted by Mike Hanley at 3:35 AM No comments: