As some of you might already know, I spent the last month and a half working at the CMU location for iD Tech Camps.  This past week was my last week working there, and during the week a reporter from the Pittsburgh Post-Gazette stopped by, doing a story on "non-traditional" summer camps in western Pennsylvania (the story appears in today's paper, starting in a sidebar on the front page).

The reporter also shot some video of the camp!

Unfortunately, the class I was teaching that week was in a different lab, so you won't see any of me there.  But the camp director gets plenty of face-time!

And yes, I was (more or less) dressed as a pirate that day too... 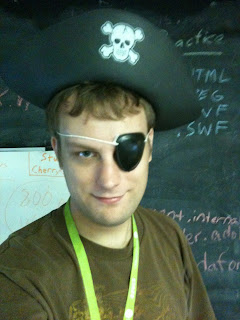