I'l be home this weekend

Yup. First weekend in November I'm going to be taking advantage of my dad's frequent flyer miles (and a convenient 3 day weekend thanks to Eid ul-Fitr) and making a quick trip back to Pittsburgh. Should be a nice change of pace, and I'll probably sleep better without my roommate snoring :)
Posted by Mike Hanley at 4:36 PM 4 comments:

Took an age and a half, but my new webcomic Directionless finally exists on the internet! There's only two comics so far, but I'm working on that part. I'm aiming for once-a-week updates, but anyone familiar with Medieval Mayhem should know not to expect that rule to be set in stone.

Yes, I know there are ads, but they're just little banners, and using Comic Genesis lets me use their slick automation tools so I don't have to update things like archive pages and "Prev"/"Next" buttons - I just upload a properly named JPEG, even in advance if I want to, and it will all be automatically updated on the appropriate day. Slick. And it's free, so who's complaining?
Posted by Mike Hanley at 11:50 PM No comments:

Yes, it's true, even with Firefox's built in filter, some cleverly-coded pop-up ads still get through. Some of them still follow the "make it look like a Windows message box" template, since apparently there are still people that stupid left in the world.

But this one tops them all...

The irony is just overwhelming...
Posted by Mike Hanley at 1:16 AM 2 comments:

An interesting article on Slate.com compares Wikipedia to the famous creaton of Douglas Adams that we all know and love. (or at least we should!)

The parallels between The Hitchhiker's Guide (as found in Adams' original BBC radio series and novels) and Wikipedia are so striking, it's a wonder that the author's rabid fans don't think he invented time travel. Since its editor was perennially out to lunch, the Guide was amended "by any passing stranger who happened to wander into the empty offices on an afternoon and saw something worth doing." This anonymous group effort ends up outselling Encyclopedia Galactica even though "it has many omissions and contains much that is apocryphal, or at least wildly inaccurate."

Interesting way to look at it, to say the least.
Posted by Mike Hanley at 5:18 PM 2 comments:

Welcome to the New Red Scare

Looks like our new society of fear and anxiety has at least one undeniable effect: wasting the Secret Service's time with frivilous nonsense that makes everyone involved look like a friggin' moron. Oh wait, I just called a god-loving Wal-Mart employee a moron, when he was just trying to protect his country from the ominous threat of the Thumbtack Terrorists? Help! The thought police are coming for meeeeeeeee!

And a less opinionated local story to prove this isn't just "fabricated by the liberal media":

Article from WVEC-TV
Posted by Mike Hanley at 10:50 PM 1 comment:

Oh, this is fun to wake up to: Looks like there's E-Coli in the tap water here.

An e-mail from the University offers this helpful advice:

Water should be boiled at a full boil for a minimum of one minute
before drinking, making ice, brushing teeth, washing dishes or being
used in food preparation; boiling kills most bacteria and other
organisms in the water.

Bathing is permitted, but incidental ingestion during bathing
activities should be avoided.

It's like studying abroad in Mexico! Just without the travel costs, or that annoying language barrier!

It is decided: the new comic will be called "Directionless." Now I just need to start the prolonged process of getting a Comic Genesis account.

Plus, I've finished the second comic! 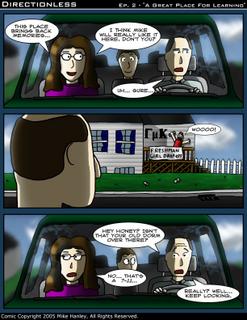 I had to do a bit of trimming to the lengthy dialogue I had written originally, but I think the point still comes across. Tell me what you think.

FYI, this conversation never actually happened, but when were were driving in there really was a sign hanging on one of the frats that read "Freshman Girl Drop-Off."
Posted by Mike Hanley at 1:19 AM No comments:

My Comic Needs a Name!

Apparently the Comic Genesis registration process can take awhile... like in the neighborhood of 2 weeks. In light of this, I need to start trying to get my new webcomic online soon if I want it to actually be online in the forseeable future. There is just one problem with this...

I have no name for the comic!

So I'm asking anyone who reads this (which I'm aware amounts to 2, maybe 3 people) to help me out. The comic will be mostly about odd/funny things that happen around campus, and will be primarily based on things that have actually happened. the characters will probably be based on people from my floor, but I'll probably combine people, as well as change some of the names (to protect the not-quite-innocent). I may also have an occasional "commentary" strip where I parody a movie I just saw or something.

If none of that made sense, here are some examples of similar comics:

And last (but most importantly...) here are the names i'm considering for the comic

Please leave comments if you like one of these over the others, or if you have a better idea.

On a side note, you can see a little preview of the second comic in the current Picture Of The Moment.

UPDATE: (on Monday) So far the only intelligent/coherent feedback I've recieved has been in favor of "Directionless", so unless something marvelously inspired comes my way in the next 6 hours or so, that's what I'm sticking with.

Coloring and shading on the second comic are coming along nicely.
Posted by Mike Hanley at 11:24 PM 7 comments:

The Coming Fight For My Money

Well isn't that just perfect. Looks like F.E.A.R. and Quake IV are both coming out on October 18th. (give or take). I'm sure they'll each cost in the neghborhood of $55, and I'm not inclined to dump in excess of a hundred bucks on video games that I don't have as much time to play as I used to anyway, especially so soon after getting the nano.